The idea of Islamization was triggered by a dichotomy. This dichotomy is not only extendsin the realm of science, but also extends in domain of religion in the context of state. From the first dichotomy generated the stigma of religious and general knowledge, while from the second dichotomy, it caused a secular attitude. As a result of this dichotomy, most Muslims keep far themselves from general science and government which results in their backwardness in the development of science and technology. On the other hand, Islam itself has the concept of tauhid in its faith. This concept was used as the foundation by Ismail Raji al-Faruqi in carrying out and succeeding the idea of Islamization of science in order to catch up Muslims’ backwardness for centuries

Most read articles by the same author(s) 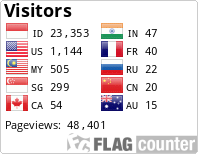 The Journal has been listed and indexed in :